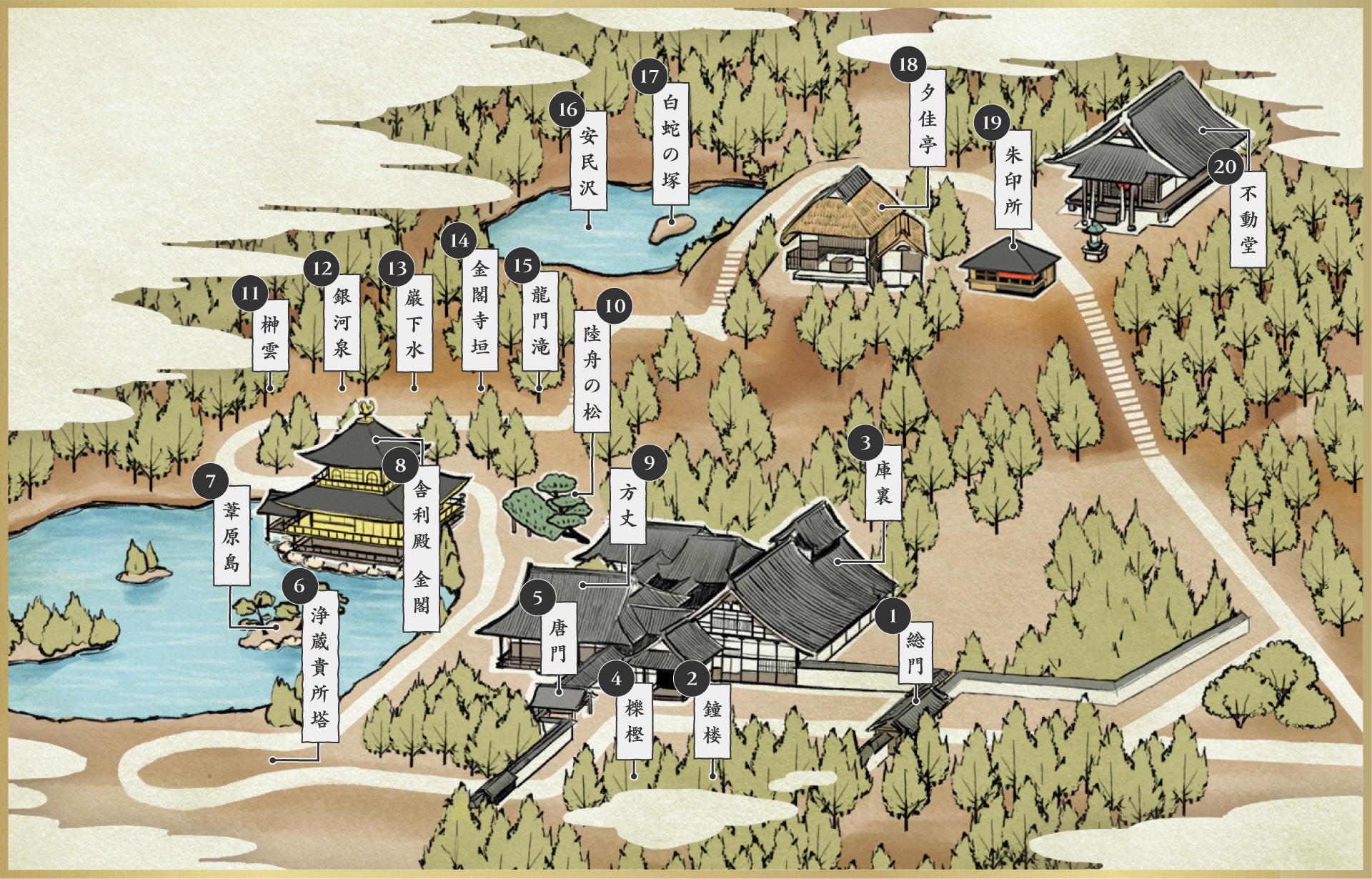 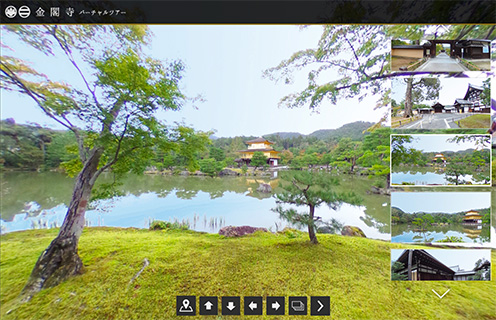 The premises will be introduced through a 360-degree virtual tour which feels just like the real thing. 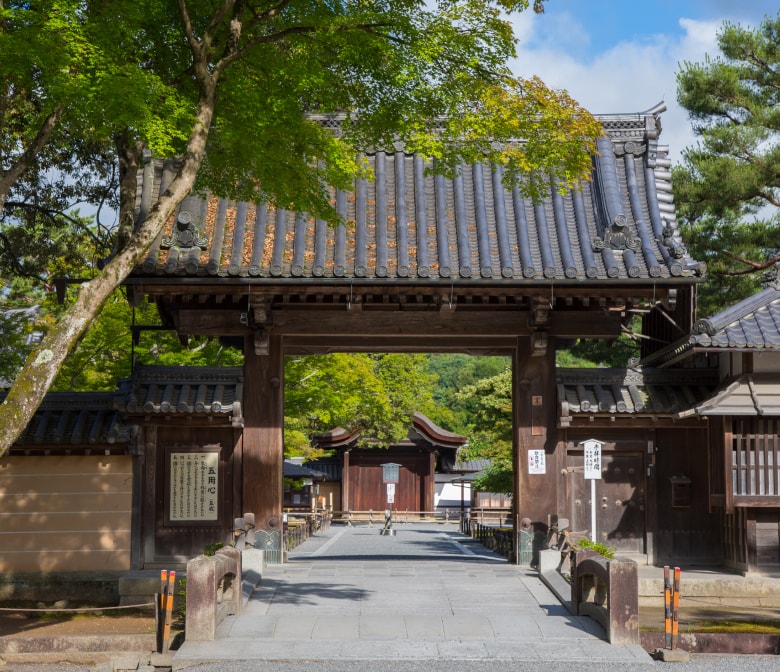 The bell is said to have been made by the commission of the Saionji family in the Kamakura period. The bell rings in the Oshiki (A Dorian) mode, with A as its base tone. 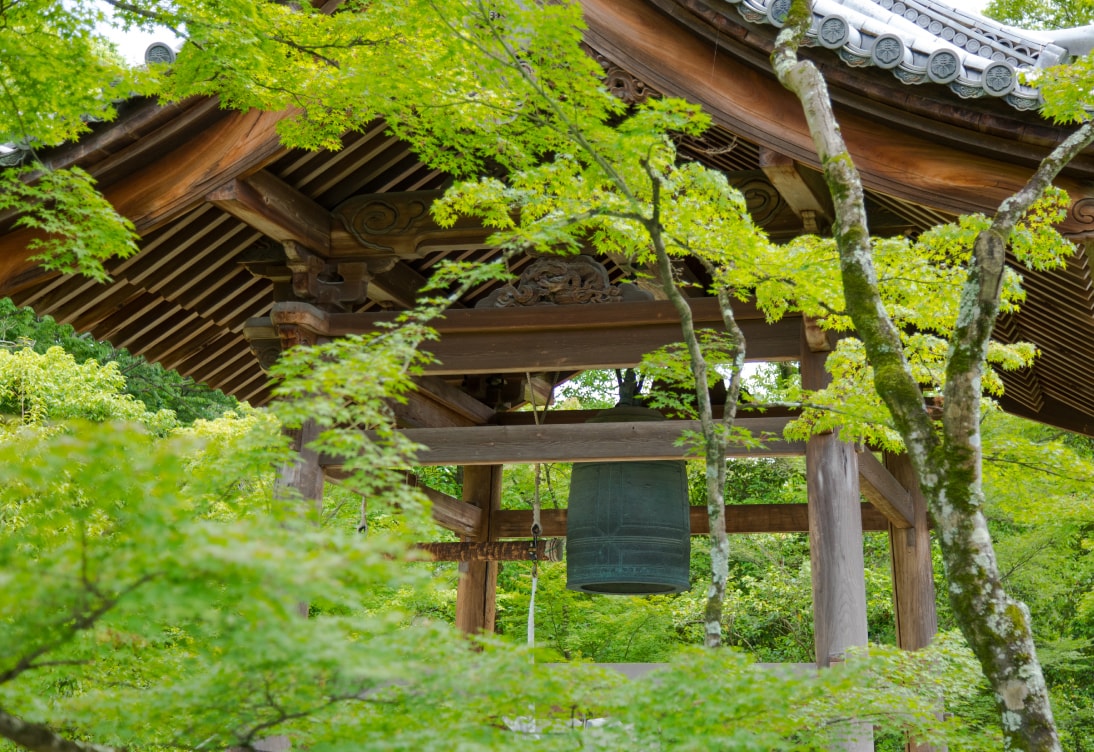 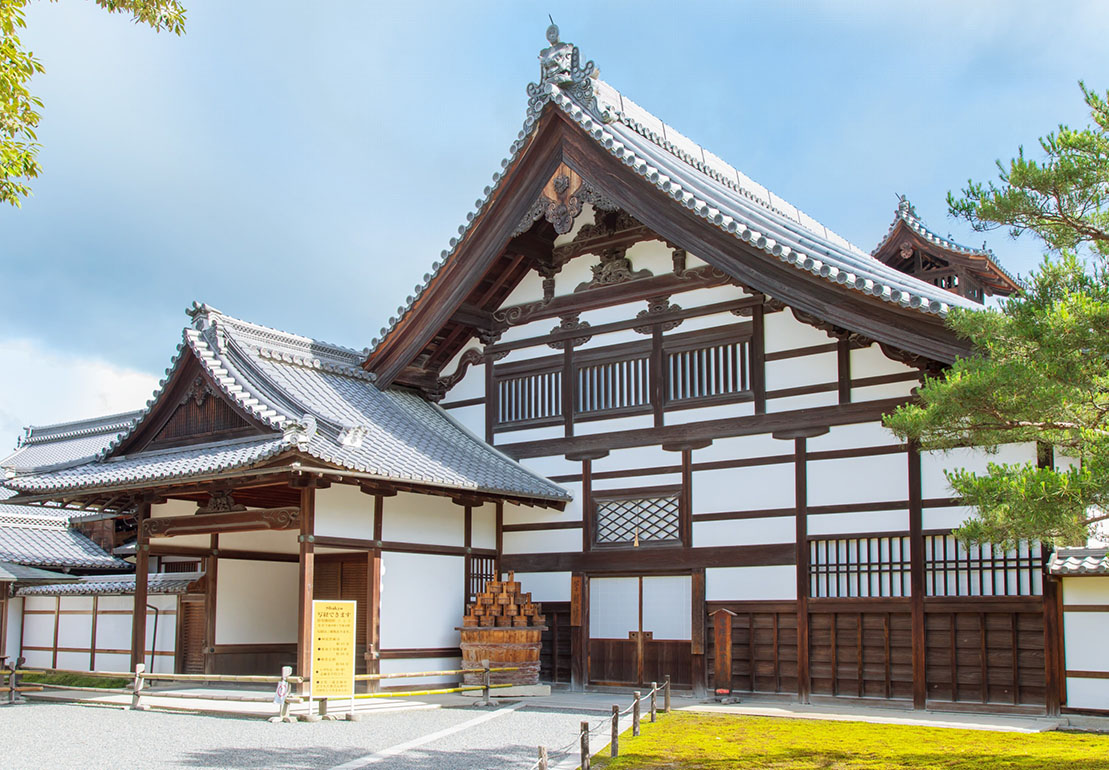 The building’s style is characteristic of Zen architecture, and it is thought to have been built in the Meio and Bunki eras (1492-1504).

The buildings of Kinkaku-ji were rearranged into their current layout at the start of the Edo period. At that time, the Quercus gilva beech tree may have been planted, or it may have already been growing and left on its own. The Quercus gilva is one of several tall trees that make up evergreen forests, and while in Japan it is found in Honshu (outside of the southern part of Kanto), Shikoku, and Kyushu, it is quite rare in the area around modern Kyoto. The remaining Quercus gilva in Kyoto are giant, prized specimens, and were designated natural monuments on June 1st, 1983. 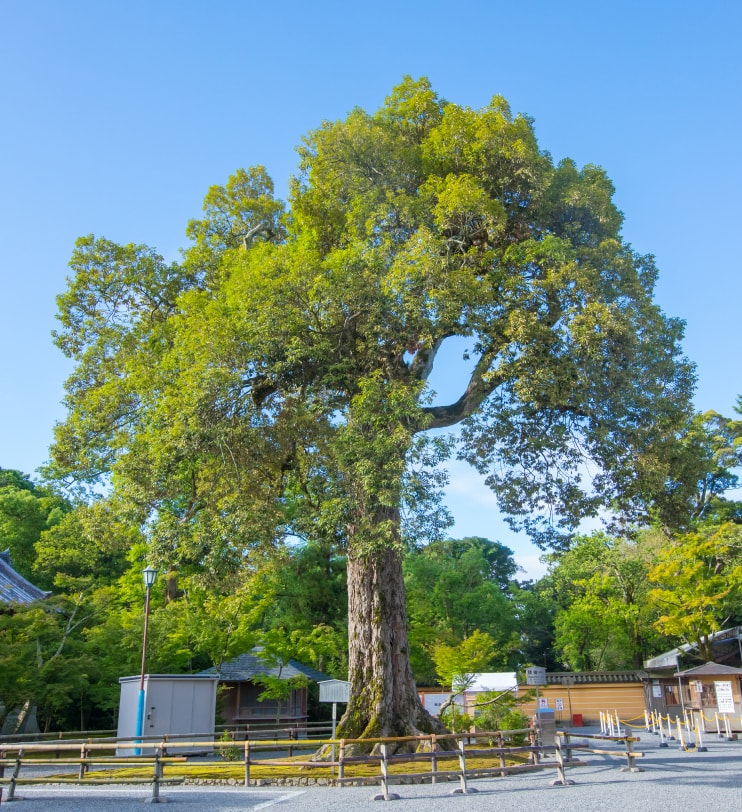 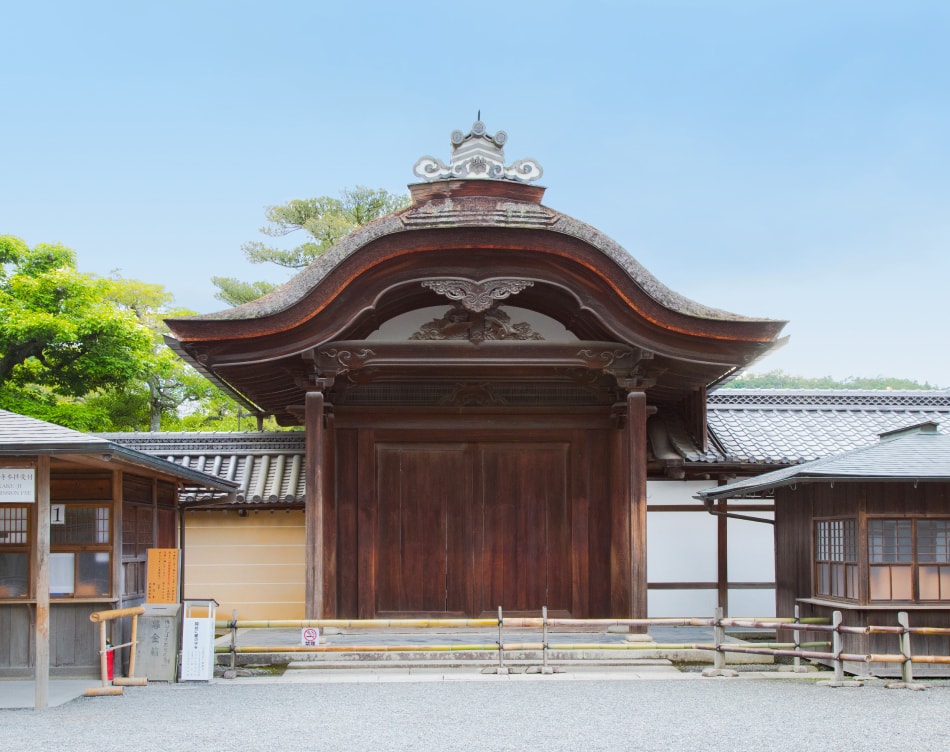 The Rokuon-ji garden takes up 92,400 m² of the approximately 132,000 m² grounds, having been designated as a unique historic and scenic landmark. The central Kyoko-chi pond is approximately 6,600 m² in area and contains islands of various sizes, such as Ashihara-jima, and famous rock formations, such as the Hatakeyama stone. 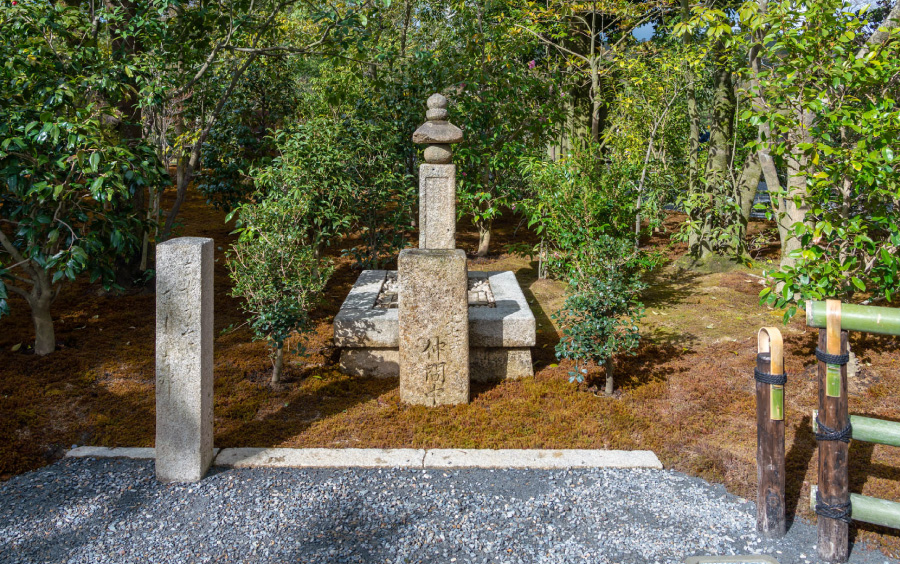 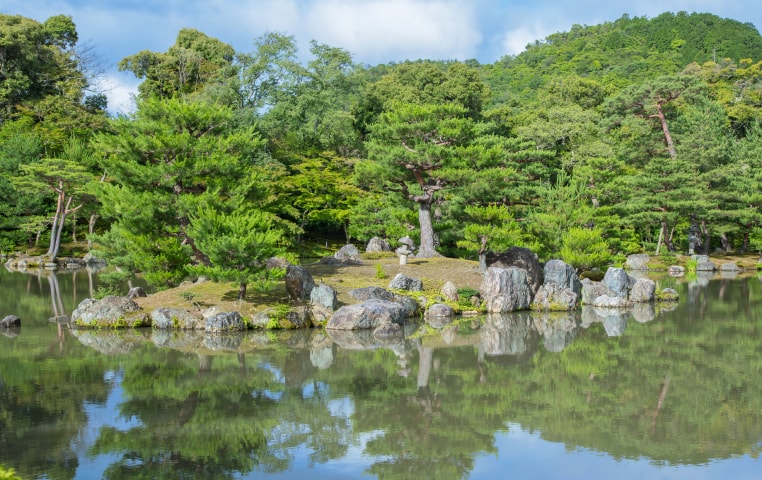 The lacquered second and third stories are adorned with pure gold leaf, the roof is shingled with countless planks of thin sawara cypress, and on top is the shining phoenix, an auspicious symbol in China. The first story is known as Hossui-in, and is built in the Heian palatial style, shinden-zukuri, while the second floor, Cho’on-do is in the buke-zukuri style that was common among samurai houses in the Kamakura period. The third floor, Kukkyo-cho, is in the style of Chinese Zen temples. This harmonious blend of three styles is considered to be a masterful exemplar of architecture in the Muromachi period. In the Autumn of 1987, the lacquer and gold leaf were reapplied, and restorations were also done on the ceiling painting and the statue of Ashikaga Yoshimitsu. 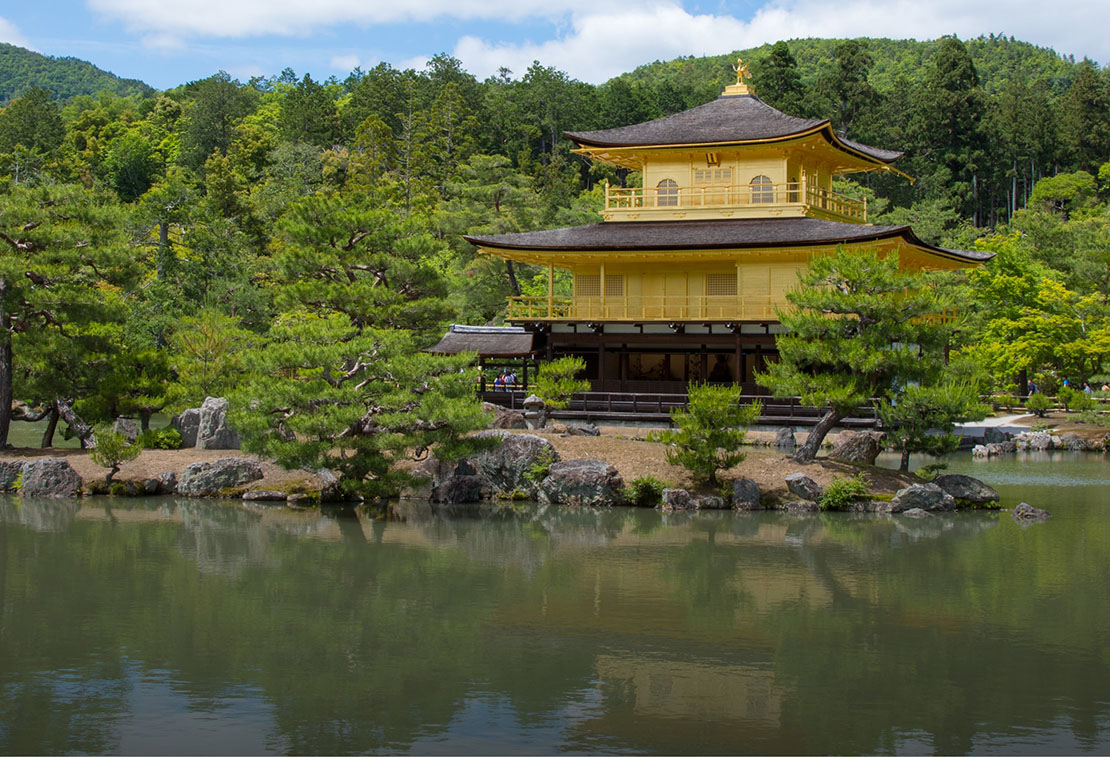 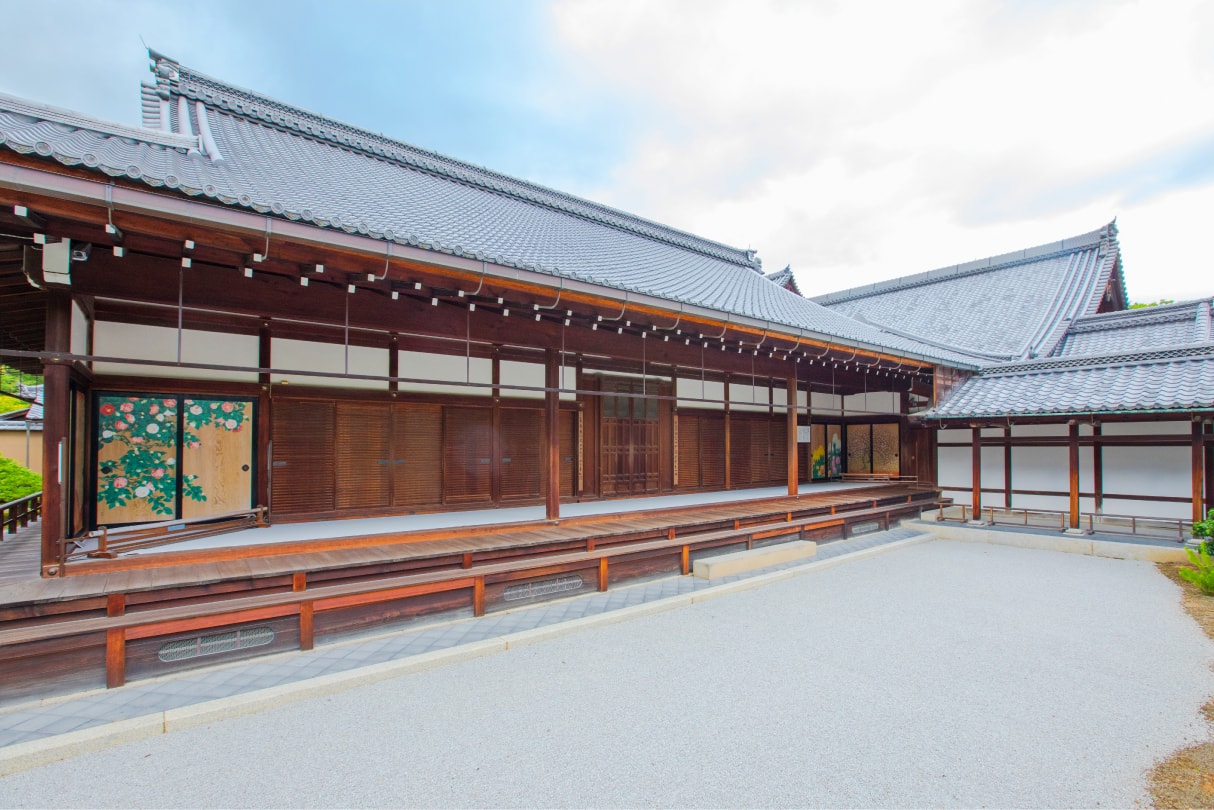 In one corner of the garden, north of the Golden Pavilion, is Kobyo Shin’un, where the tutelary deity of the temple, Kasuga Myojin, is enshrined. 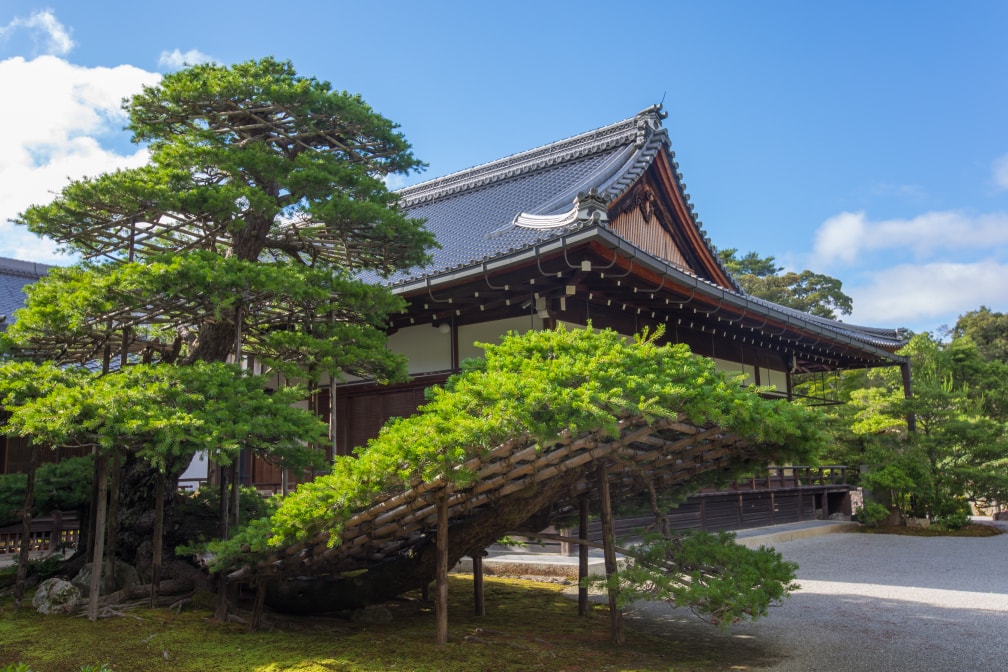 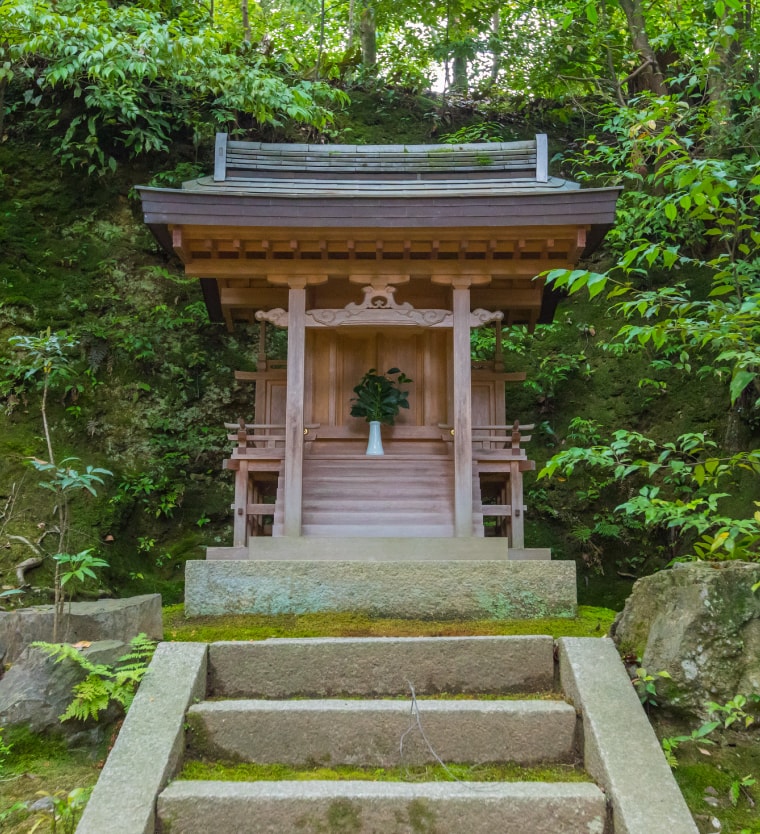 Continuing past the Pavilion is the Gingasen, or the Milky Way Spring, which was said to be where Yoshimitsu got the water for his tea, and which still spouts pure clean water to this day.

Gankasui is a stream that is said to have been used by Yoshimitsu to wash his hands. 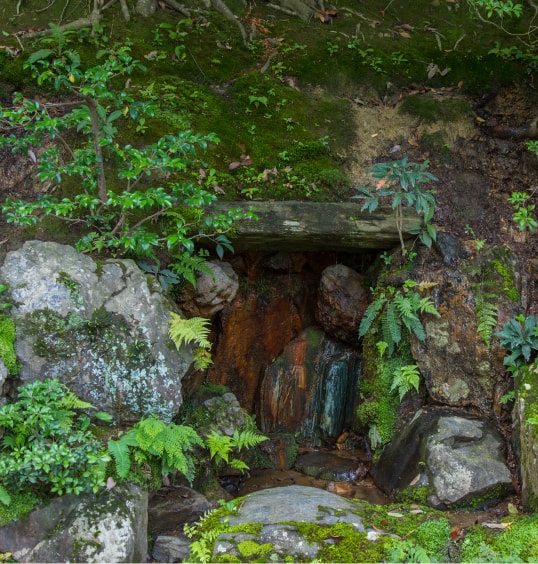 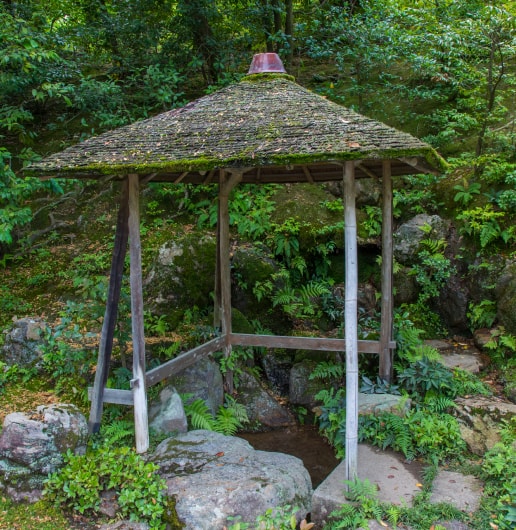 On the left side of the Ryumon Falls is a stone stairway. This small stone bridge is called Kokei-kyo, and on both sides are low bamboo fences, which are considered as the model for a style of bamboo fences called Kinkakuji-gaki.

The falls are 2.3 meters tall, and topping them off is a rigyoseki, or a carp stone, a reference to an ancient Chinese legend where a carp scaled the Ryumon Falls and transformed into a dragon. It is placed at such an angle that just as the fish would jump up into the form of a dragon, it would move back down into the plunge basin of the falls. 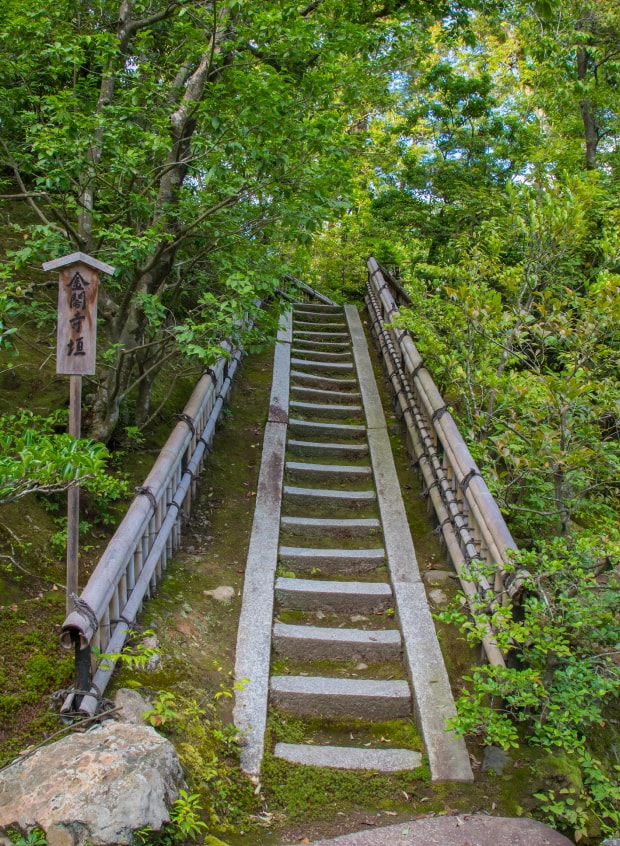 Anmin-taku, also known as Ushi-taku and Bo’un-taku, is a pond surrounded by deep forest. As it does not dry up even during droughts, it has been used as a place to pray for rain. The small islet inside the pond holds a five-ringed stone pagoda known as Hakuja-cho, or White Snake Mound, and is said to enshrine the Saionji family deity, and thus this pond is considered to be one of the historical remains of the family. After you climb the mountain path past Anmin-taku, you will reach Sekka-tei. In the Edo period, when the then declining Golden Pavilion was being restored, the one who restored the pond garden was Horin Josho. Josho was instructed to make Sekka-tei by the tea ceremonialist Kanamori Sowa, for the benefit of Emperor Go-Mizu-no-O, creator of the Shugaku-in Imperial Villa. The tea room is made in the sukiya-zukuri style that Sowa was fond of, and the name (meaning Evening-Sun Stop), is derived from the fact that the setting sun over the Golden Pavilion is particularly beautiful from this spot. This tea room is also famous for its nandina bamboo alcove posts and bush clover shelves. 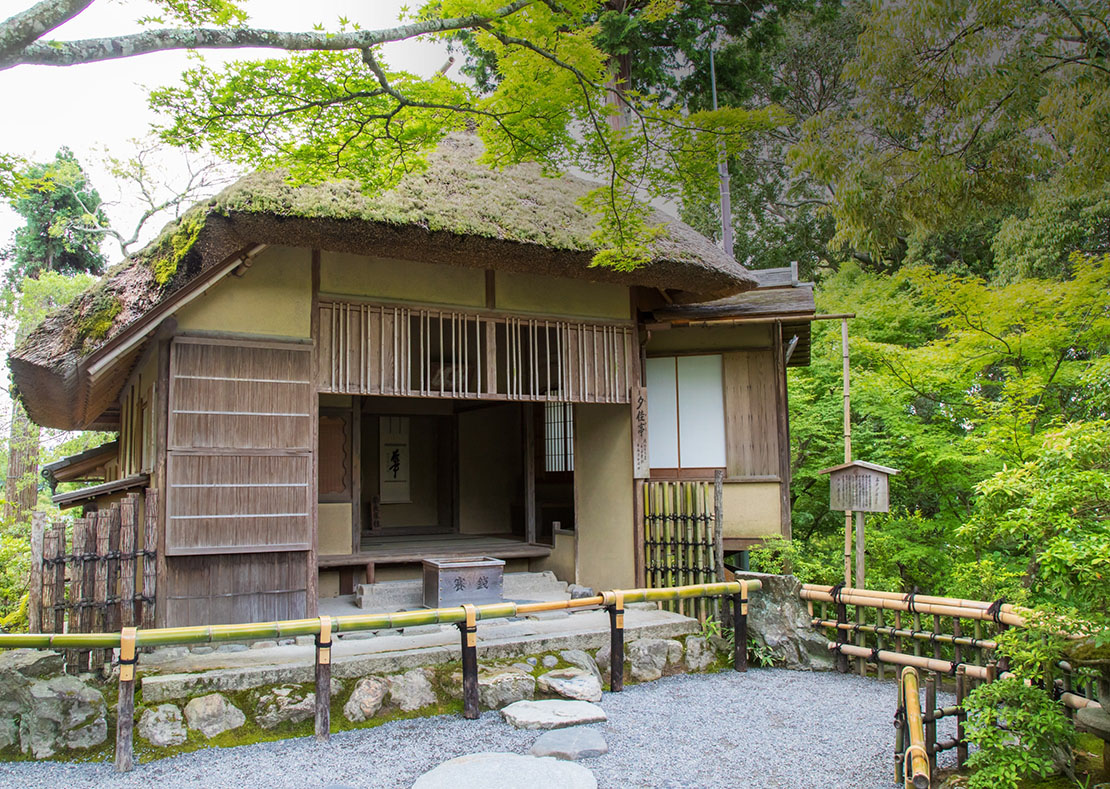 The principal image of the temple is a stone statue built by Kobo Daishi of Fudo Myo-o (Skt. Acala), which is hidden from public view and widely believed to have miraculous power. The doors to its shrine are opened during festivals on the Setsubun holiday and on August 16th. 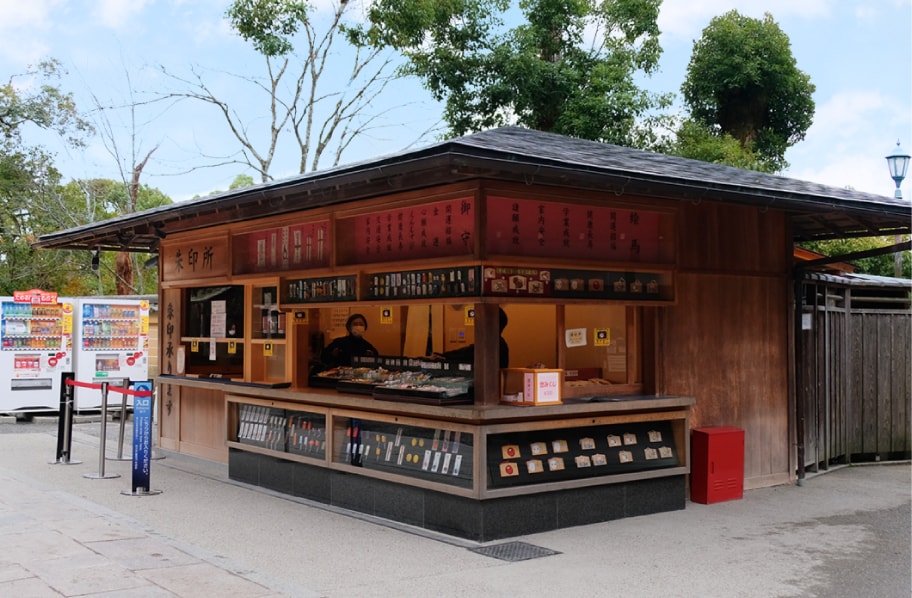 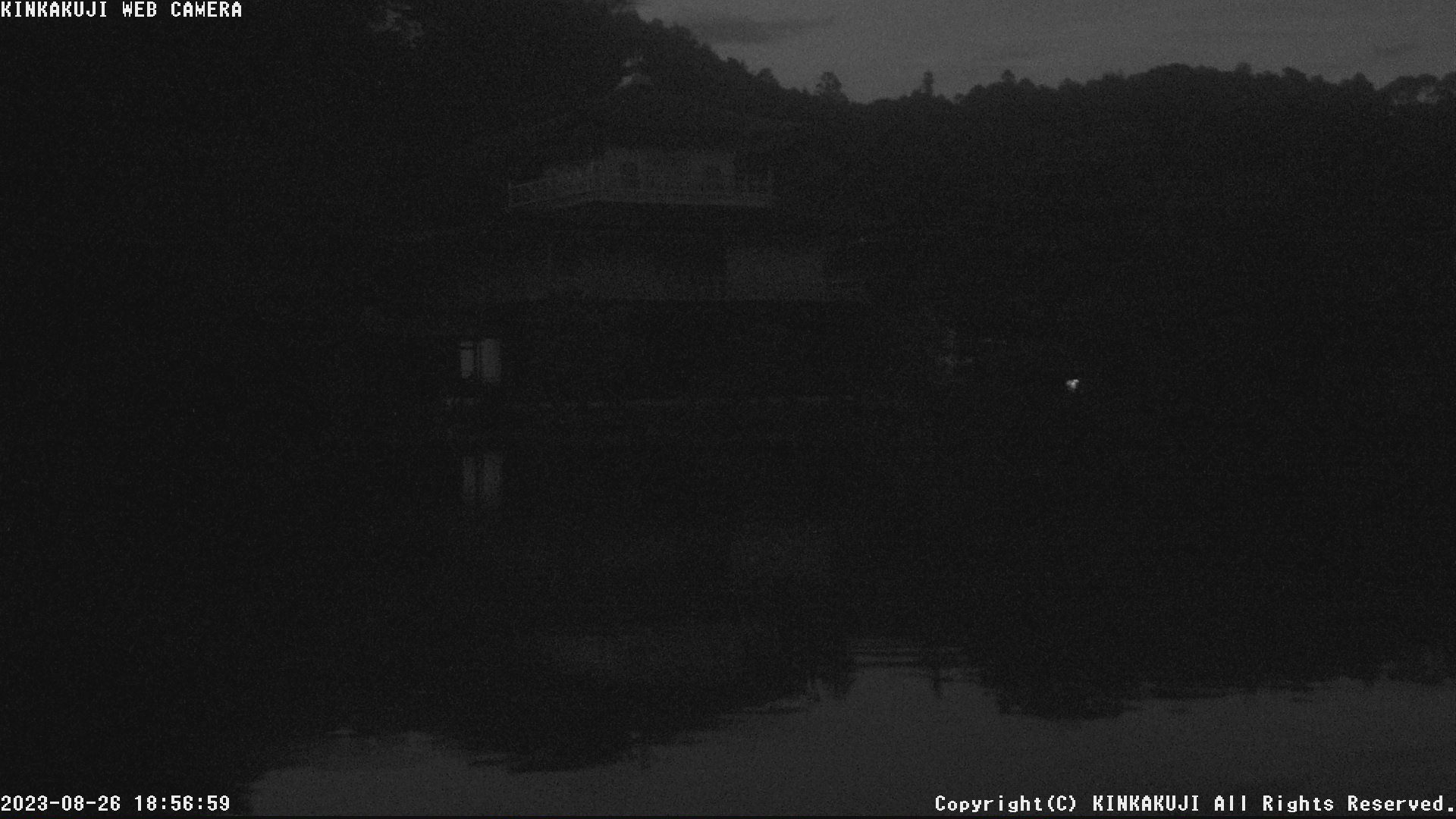