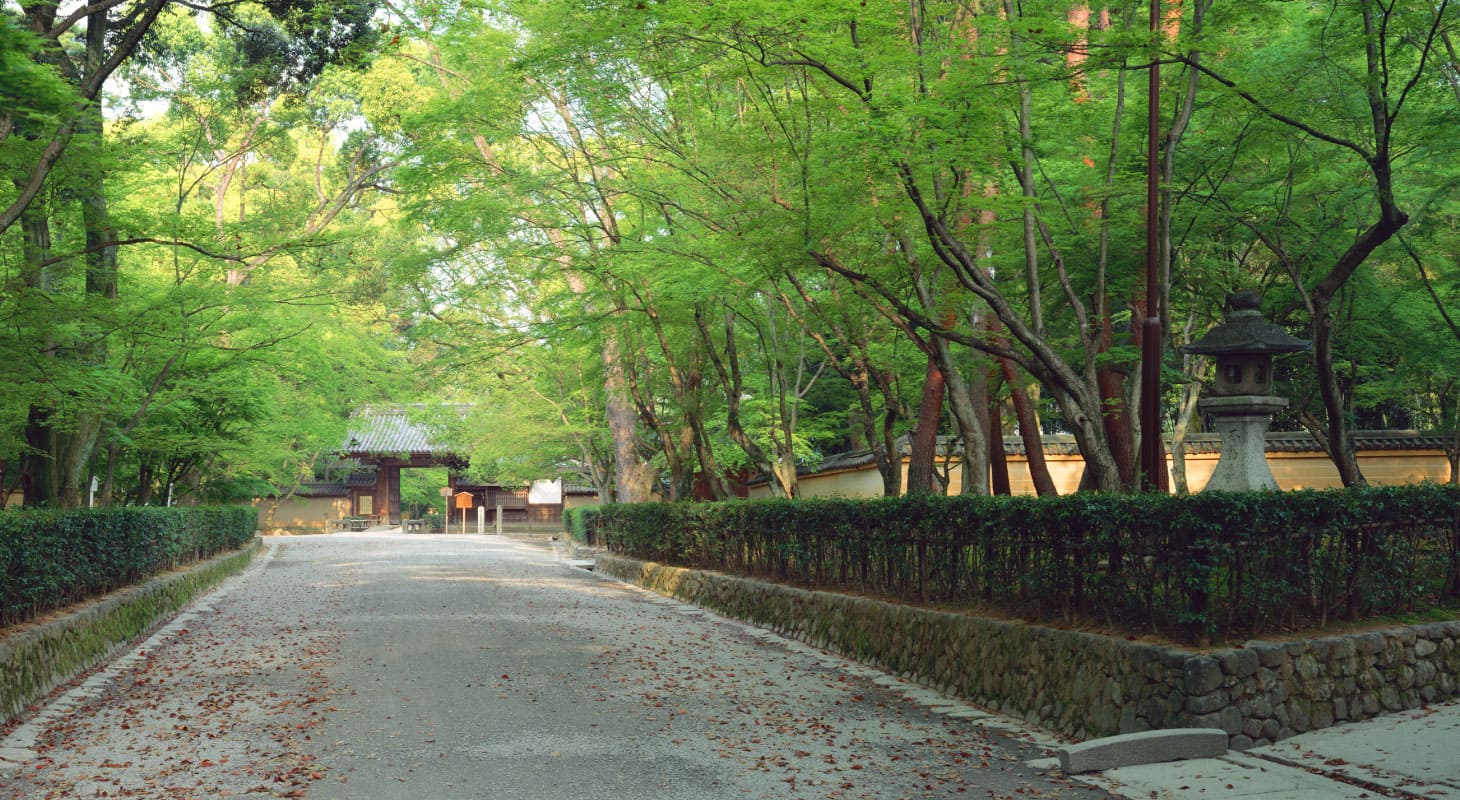 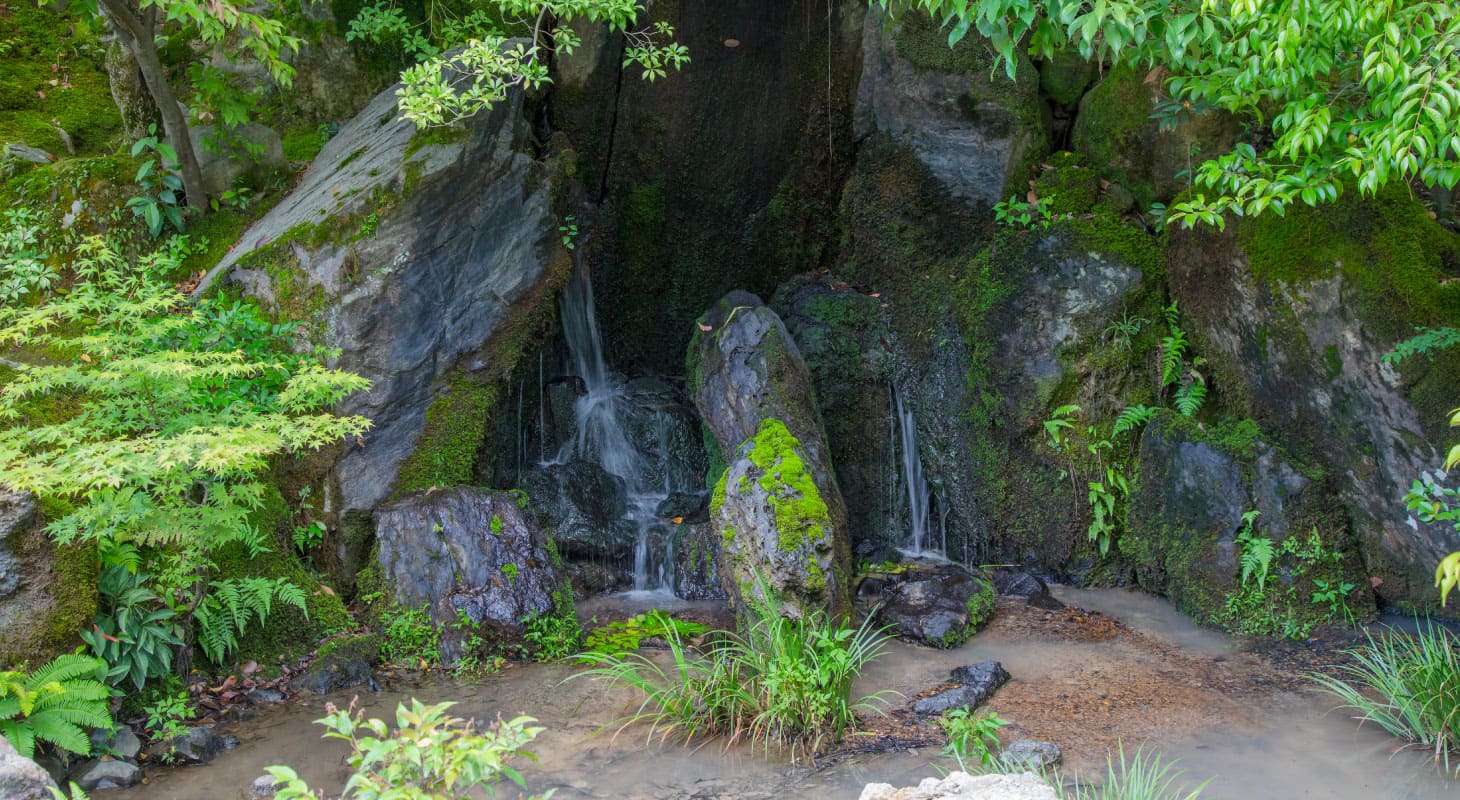 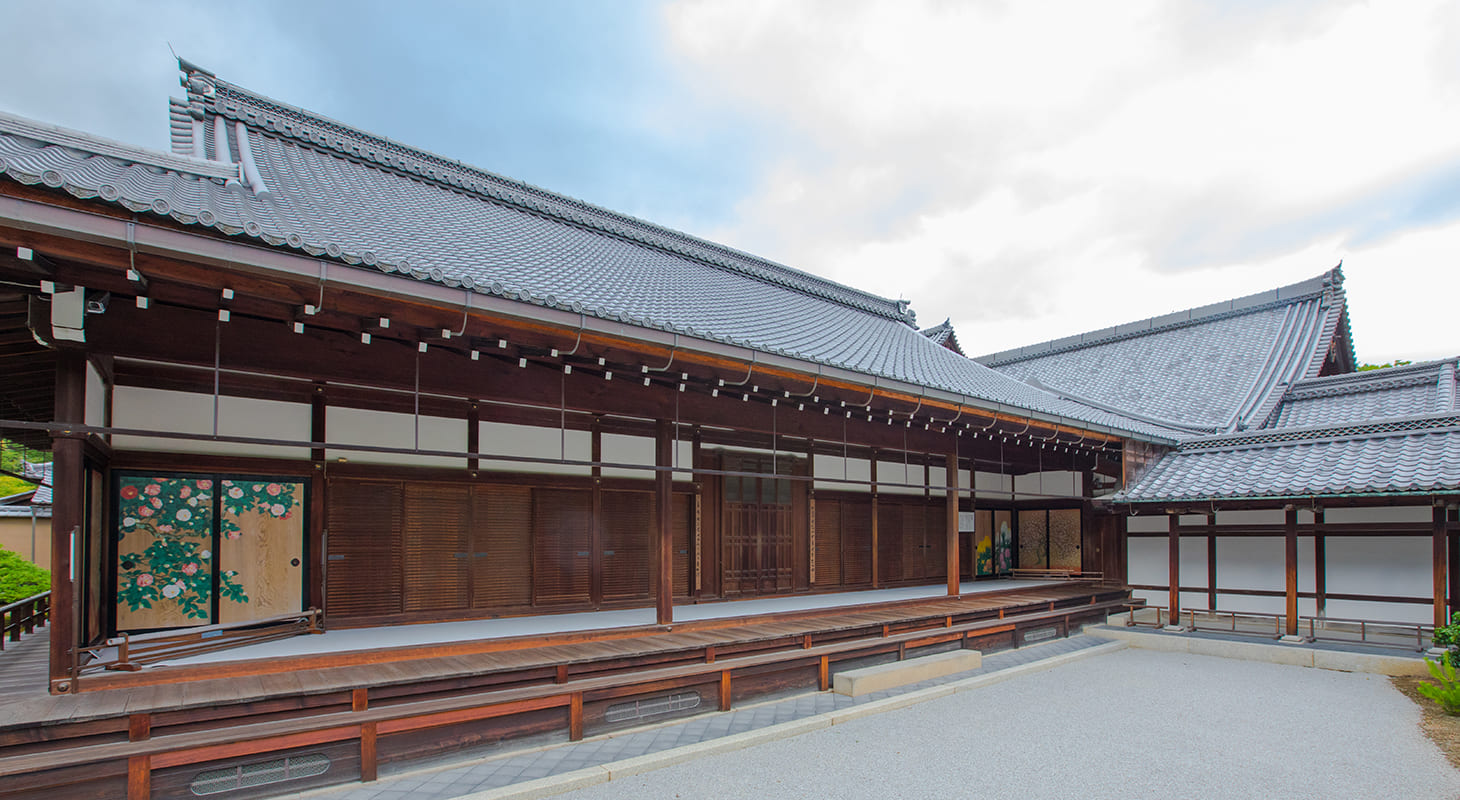 Its famous Golden Pavilion (Kinkaku)—actually a pagoda made to house the sacred relics of the Buddha—has given this temple the popular name of Kinkaku-ji (“Temple of the Golden Pavilion”), however the official name of this branch temple of the Rinzai-sect Zen temple of Shokoku-ji is Rokuon-ji. The temple was designated as a UNESCO World Heritage Site in 1994.

During the Kamakura period (1185-1333), this land was the site of a villa of the aristocrat Saionji Kintsune, known as Kitayamadai. During the Muromachi period (1392-1573), however, it caught the attention of the third Ashikaga shogun Yoshimitsu (1358-1408), who took over the site from the Saionji family in order to build his own villa, which he called Kitayamadono. This complex, whose gardens and architecture focused around a central Golden Pavilion, was said to evoke paradise on earth and was the destination of such esteemed visitors as Emperor Gokomatsu (r. 1392-1412), father of the Zen priest Ikkyû. The estate also became the center of the so-called “Kitayama culture,” which was central in importing various aspects of Ming-dynasty Chinese culture into Japanese society, thanks to increased trade relations with Japan’s continental neighbor.

After Yoshimitsu’s death, the villa was turned into a temple according to his will, with Musô Sôseki (also known as Musô Kokushi, 1275-1351) becoming its first abbot. The name Rokuon-ji was taken from the first two characters of Yoshimitsu’s posthumous name.

Kinkaku-ji is located in Kinkakuji-cho, Kita-ku, in the northwester corner of Kyoto. It is a beautiful area, with the mountains Kinugasayama to the west and Hidari Daimonjiyama behind it. The range of mountains running along the northern part of Kyoto is known as Kitayama, but the area around Kinkaku-ji is sometimes referred to as Hokuzan, an alternative pronunciation of the characters used to write Kitayama. This name can be traced back to the Heian period (794-1185), and at that time was used to distinguish the larger area (Kitayama) extending north into Kyoto Prefecture from the smaller (Hokuzan) area close to Kinkaku-ji. From the mid-Heian period, many burial sites were located here, and there are still numerous tombs—among them that of Emperor En’yu (r. 969-84)—crematories, graves, and burial mounds in the vicinity. Today the area to the west of Kinkaku-ji is known as Himuro (“ice chamber”), a name thought to derive from the ice chambers that the imperial court operated there. In winter, ice was cut into blocks and stored in chambers excavated in the deep recesses of Hidari Daimonjiyama and other mountains in the area, where it could be preserved for use in warm weather. In the past, the area was also regarded as a rich hunting grounds and a desirable locale for temples. The site of Kinkaku-ji, however, seems to have been primarily rice paddies and farmland, and was passed from its owner, the head of the Office of Shinto Worship, to Saionji Kintsune (1171-1244). Saionji built the first structures on the site, the Saion-ji family temple and a villa known as Kitayamadai.

Kinkaku-ji’s Relics Hall (Shariden), commonly known as the Golden Pavilion, is so well known that the entire temple has come to be called Kinkaku-ji, but the temple’s official name is Rokuon-ji. It was named after the third Ashikaga shogun Yoshimitsu (1358-1408) and was part of his private Kitayama villa. Kinkaku-ji is a Rinzai Zen temple belonging to the Shokoku-ji branch. Rokuon (Deer Park) was the site of Shakyamuni’s first sermon after attaining enlightenment, and Rokuon’in was Yoshimitsu’s posthumous name.

The name Kitayama can be traced back to the Heian period, at which time temples such as Reigan-ji, Koryu-ji, and Hoon-ji were built here. There are also many tombs and burial mounds, and it was a site for cremations. In the Kamakura period, the land became the property of the powerful Saionji clan, and Saioinji Kintsune built a luxurious villa here known as Kitayamadai. But with the collapse of the Kamakura military government the influence of the Saionji family also declined precipitously, and with it Kitayamadai fell into disuse and disrepair. Ashikaga Yoshimitsu acquired the villa from the Saionji clan and built his Kitayama palace there.

The Saionji clan was part of the northern branch of the Fujiwaras, and at first was not particularly influential. With the appearance of Saionji Kintsune, who became a central figure in the imperial court, the power of the clan grew so strong that it eclipsed that of the regent. At about this time (probably the 1220s), Kintsune decided to build a clan temple on the site of the present Kinkaku-ji. The land belonged to the head of the Office of Shinto Worship, who accepted Kintsune’s offer of an exchange of the property for a manor in Matsue, Owari Province. No documents concerning the construction of the temple survive, so it is impossible to know what it looked like, but we know that a magnificent dedication ceremony was held in 1224 and that the following year the poet Fujiwara Teika (also, Sadaie, 1162-1241) visited Saion-ji and Kitayamadai for the first time. According to Teika, the design was remarkably novel. He was particularly impressed by the forty-five-foot waterfall and a beautiful pond as blue as lapis lazuli. Recalling but also surpassing Fujiwara Michinaga’s (966-1027) symbol of personal glory, Hojo-ji, Kintsune’s Saion-ji and Kitayamadai were described by contemporaries as resembling the realm of Taoist Immortals or the Pure Land. But with the drastic decline of the Saioinji family, Saion-ji and Kitayamadai also fell into disrepair. The only surviving trace of the former structures is the pond.

Yoshimitsu built a Muromachi palace (Muromachidai) in Kyoto, to which he transferred the day-to-day operations of the shogunate (military government). Known as “Hana no Gosho,” or the “Palace of Flowers,” it became the de facto seat of government.
A practitioner of Zen under the tutelage of Shun’oku Myoha (1311-88), a disciple of Muso Soseki, Yoshimitsu decided to build a Zen temple and had Shokoku-ji constructed adjacent to the shogunate headquarters. Shokoku-ji became a center for the famous Gozan (“Five Mountains”) literature—Chinese learning fostered by Zen monks—and flourished as an important cultural nexus. Yet Yoshimitsu’s building ambitions remained unsatisfied, and he had the former Saionji Kitayamadai, which had fallen into ruin, completely renovated as the Kitayama palace. For the Relics Hall of this complex, he had a golden pavilion built, with a Shakyamuni triad installed on the first floor, a Kannon image on the second, and the sacred relics on the third.

Thereafter, Yoshimitsu once again transferred the operations of the shogunate, this time from the Muromachi palace to the new Kitayama palace. Yoshimitsu strongly promoted trade with Ming China, and he entertained official emissaries of the Ming at his new Kitayama headquarters. In this fashion, he was able to assemble a large collection of important Chinese cultural artifacts, which formed the foundation of what came to be known as Kitayama culture.
After Yoshimitsu’s death the Kitayama palace lost its official status as the residence of the shogun and became, as his behest, the Zen temple named Rokuon-ji, after his posthumous name Rokuon-in. The early history of Rokuon-ji as a temple is not very well documented.

Yoshimitsu and the Golden Pavilion

Yoshimitsu retired in 1394 in favor of his nine-year-old son Yoshimochi, and the following year, at the youthful age of thirty-eight, took full Buddhist orders. His decision seems to have been informed by both his past experiences and hopes for the future. He had succeeded to the post of shogun as a boy of nine, upon the death of his father Yoshiakira, and in the twenty-nine years of his reign he faced many challenges-which he rose to admirably, successfully resolving the schism between into Northern and Southern imperial courts, reuniting Japan, and bringing peace to the realm. Having accomplished this, he apparently longed for freedom from the demands of official life and wished to live in a less restricted fashion, following his personal inclinations. After taking possession of the dilapidated Saion-ji and Kitayamadai from the Saionji clan, Yoshimitsu began the construction of his new residence, the Kitayama palace, in 1397. The design of both the architecture and gardens exhibited the epitome of refinement, but he devoted the most attention to the Relics Hall-the Golden Pavilion.
In 1408, Yoshimitsu held a magnificent ceremony for the imperial visit of Emperor Gokomatsu (r. 1392-1412) which came to be known as the Imperial Visit to Kitayama and remains a well known event to this day. Yoshimitsu resided at Kinkaku-ji until his death at the age of 51. It was after the death of Yoshimitsu that Yoshimochi (1386-1428) designated Muso Soseki the honorary founder of the temple and officially named it Rokuon-ji.

The fortunes of the Zen temples that enjoyed the support of the shogunate were inextricably tied to the shogunate’s fortunes, and with the decline in the power of the military government they faced economic difficulties. In addition, many Zen temples, including Shokoku-ji, were destroyed by fire during the Onin War (1467-77). Rokuon-ji also suffered damage, but the Golden Pavilion, Stone Fudo Hall, and the Goma Hall, among others, escaped destruction. Following the Onin War, the fifteen generations of Ashikaga shoguns came to an end, and after the turbulent Azuchi-Momoyama period (1568-1615), the founder of the Tokugawa shogunate, Tokugawa Ieyasu (1543-1616) inaugurated an age of peace.

In the Meiji Period, Rokuon-ji lost its official sponsorship and with it, its base of financial support. It was also a target of the persecution of Buddhism that took place in Japan at this time, but overcame these difficulties through the efforts of its abbots and survived. It first opened its doors to the public in 1894, under the auspices of its abbot, Kanso Choro, on the occasion of a major trade fair held in Osaka.

The gardens of Japanese temples reflect the Buddhist worldview, as do the temple buildings. Simply by visiting a temple and experiencing its environment, one comes into contact with the teachings of Buddhism in a form even more convincing than sermons or lectures on Buddhist doctrine.
With the dramatic growth of the Japanese economy after World War II, Kinkaku-ji has become an extremely popular tourist destination. Large numbers of people have had the opportunity to experience and learn to appreciate Zen and Zen culture through visits to Kinkaku-ji. As the result of the many people involved with the temple’s administration and upkeep over its long history, visiting Kinkaku-ji has emerged as a unique method of propagating the Buddhist teachings.