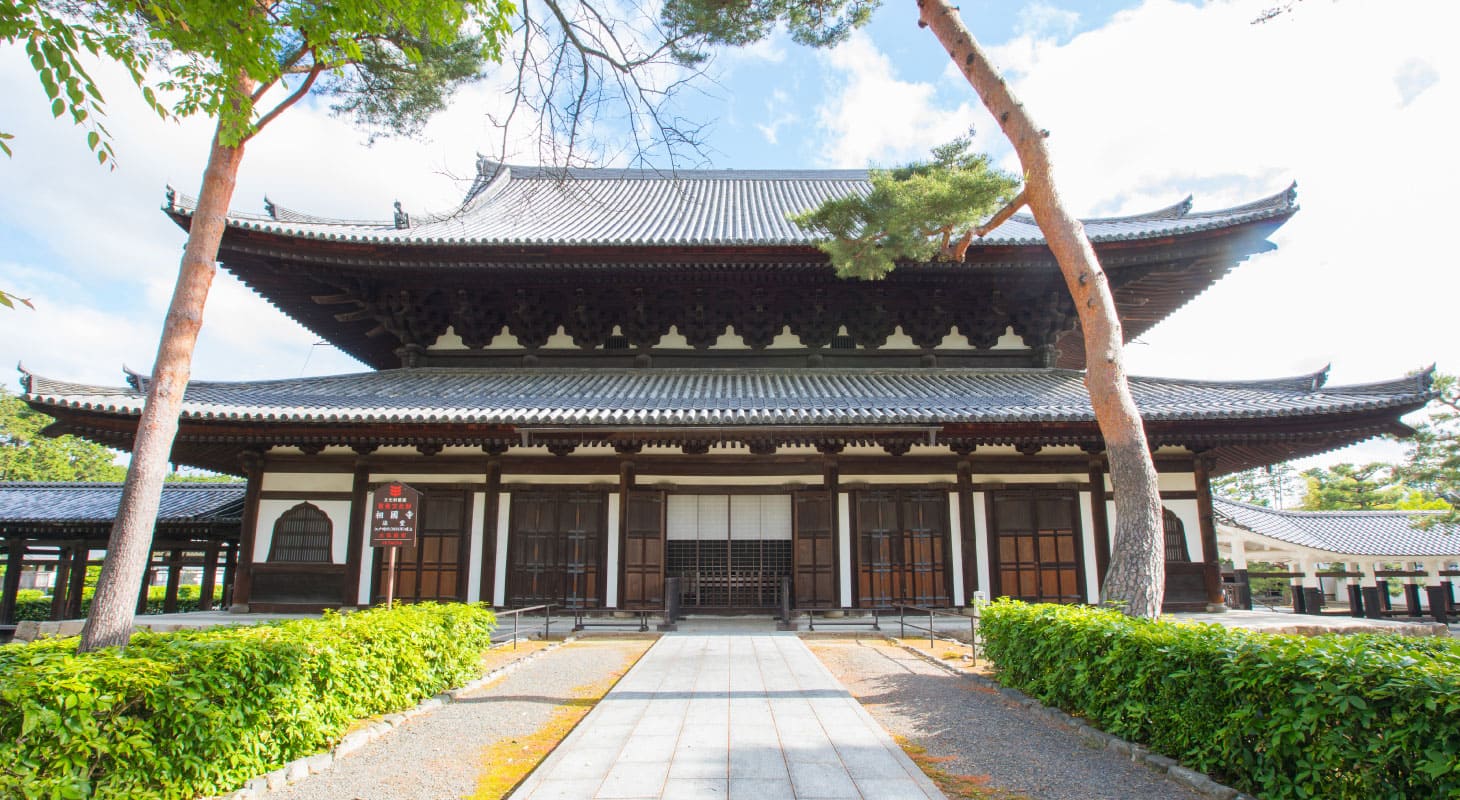 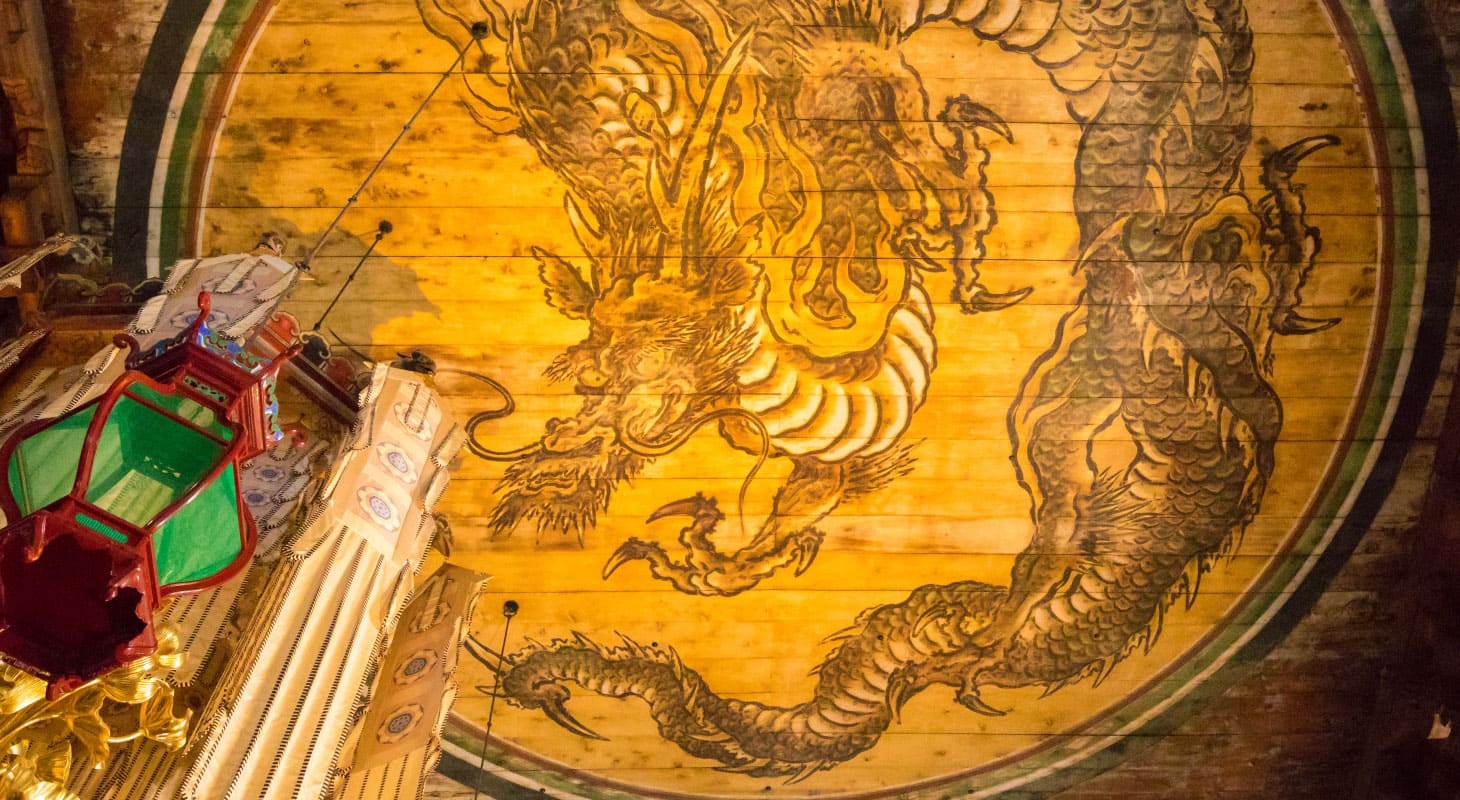 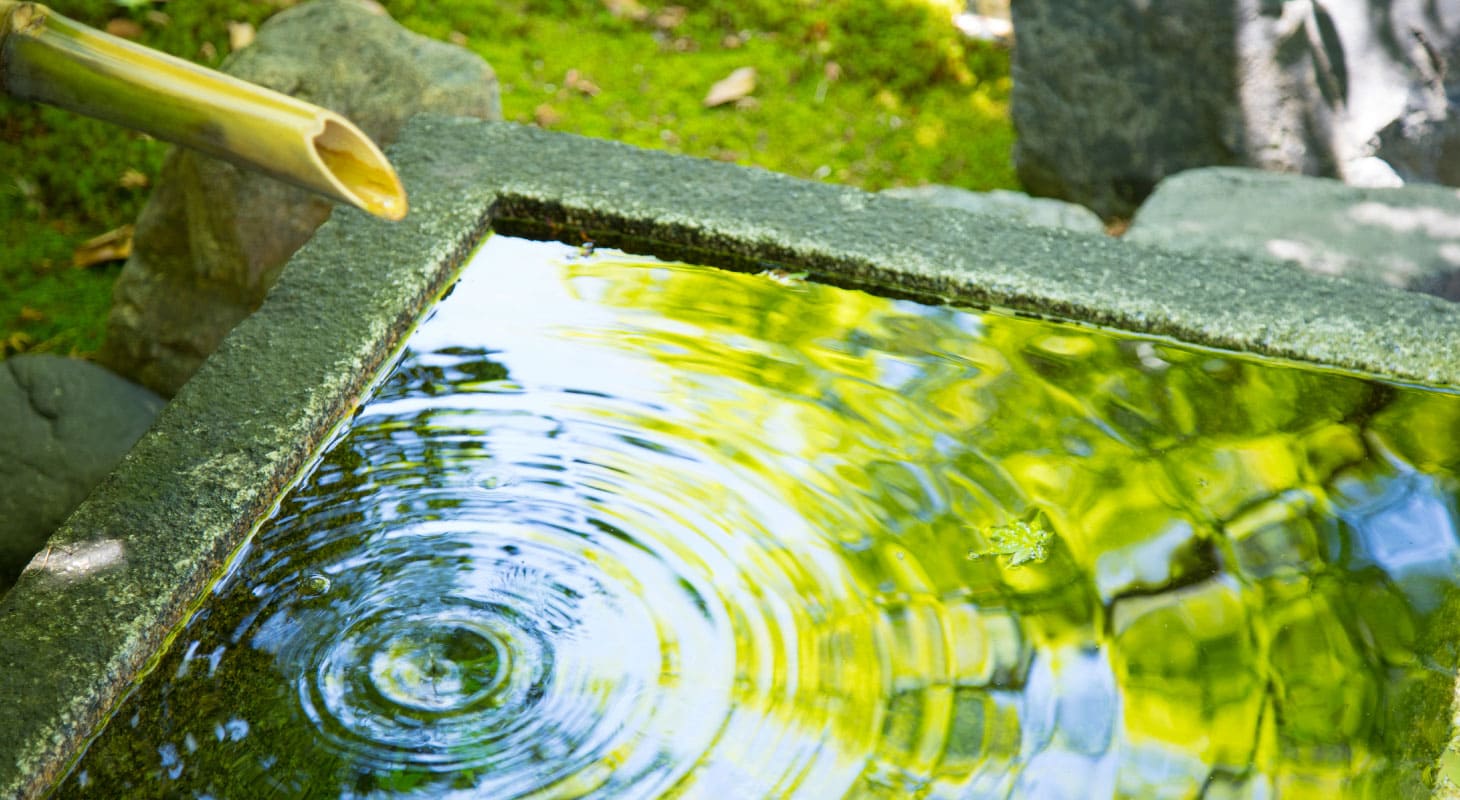 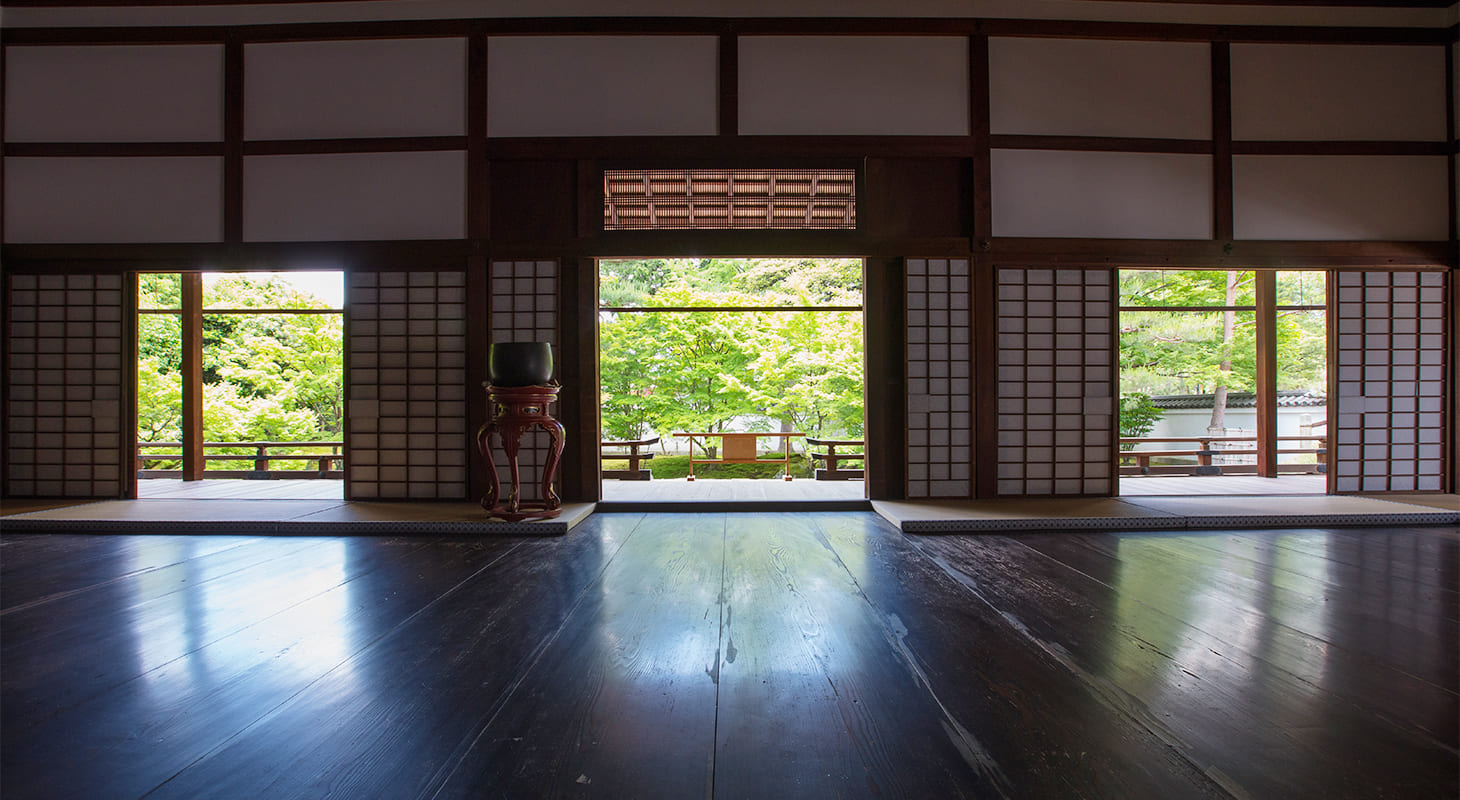 Headquarters temple of the Shokoku-ji
Branch of Zen Rinzai School.

The temple of Shokoku-ji, officially Mannenzan Shokoku Joten Zenji, is the second of the Kyoto Gozan, the five leading Rinzai Zen temples in Kyoto during the medieval period. Tucked away into a quiet area in northern Kyoto, the silent remains of its original Entrance Gate (Sanmon) and Buddha Hall (Butsuden), now shaded with the intermingling branches of pine and cypress trees, remind the visitor of its former glory.

Shokoku-ji was built under the auspices of Shogun Ashikaga Yoshimitsu (1358-1408), with the Buddha Hall (Butsuden) completed in 1394 (Shitoku 1). Thereafter, however, the complex was ravaged by fire and rebuilt numerous times. The final great fire, in 1788 (Tenmei 8), burned down almost all the main temple buildings, leaving only the Dharma Hall (Hattô) and the Imperial Gate (Chokushimon) intact. A painting entitled Famous Places in the Capital (J., Miyako meisho zu-e), dating to 1780 (An’ei 9), depicts quite accurately the appearance of the temple precincts before the Tenmei-erafire.

The Chinese characters used in the temple’s name are often mistakenly read “Shokoku-ji”. but the proper pronunciation is “Shokoku-ji”. This reading is confirmed by a notation on the aforementioned Famous Places in the Capital painting, which names the temple “Shokoku-ji”. The characters for “shokoku” mean “a person who helps the country”, deriving from a Chinese word meaning “prime minister”, while “ji” means “temple”. This name is thought to reflect the fact that the temple was built by the shogun Ashikaga Yoshimitsu.

Following Karasuma Street, one of the main avenues of the Kyoto, north from Kyoto Station to about the center of the city, one arrives at the Imperial Palace (J., Gosho). Shokoku-ji is located on Imadegawa Street, which runs along the north side of the palace, in front of its north Imadegawa Gate.
This area was previously the site of the temples of Izumo-ji, founded by Dengyo Daishi (also known as Saicho, 767-822); Jingu-ji (later known as Hyakumanben Chionji), founded by Genku (1133-1212); and Ansho-ji. At the time of Shokoku-ji’s establishment, its main gate was situated in the vicinity of Muromachi Ichijo, and the grounds encompassed some 14.4 million tsubo (approximately 4,760 hectares, or 11,760 acres), ranging from the forest of Kamigoryo Shrine in the north to Teramachi in the east and Omiya Dori in the west. The area of Kyoto in front of the temple’s present east gate is still known as Tonodan, or “Pagoda Hill,” and is believed to have been the site of a seven-story pagoda once on the temple grounds. The area of Kyoto called Bishamon-cho is the site of a former Bishamon Hall on the temple grounds, while the area of Furonozushi-cho (“Bath Shrine district”) in front of the west gate is believed to have been the site of the temple’s baths.

Today, Doshisha University is located to the south of Shokoku-ji, while Seian Junior and Senior High Schools and Karasuma Junior High School are located to the north. The major portion of the campuses of these schools were formerly the sites of Shokoku-ji structures that could not be rebuilt after the great Temmei Fire of 1788 or temples that were abolished or amalgamated following the Meiji Restoration of 1868. Toward the end of the Edo period (1615-1868) most of the buildings lost to fire had been rebuilt and the temple restored to its original scale, but today the temple grounds encompass only 40,000 tsubo (about 13 hectares or 33 acres).
There are thirteen temple buildings, halls, and other structures, including the main temple of Shokoku-ji, on the temple precincts, as well as such off-precinct temples as Rokuon-ji (more commonly known as Kinkaku-ji, or the Temple of the Golden Pavilion), Jisho-ji (better known as Ginkaku-ji, or the Temple of the Silver Pavilion), and Shinnyo-ji. Some 130 temples around Japan are official subtemples of Shokoku-ji.

Ashikaga Yoshimitsu was born in 1358 to the second Ashikaga shogun Yoshiakira (1330-67) and Yoshiko, the daughter of Kengyo Tsusei, a high-ranking official of Iwashimizu Hachiman Shrine. As a child he was known as Shun’o.
When Yoshimitsu was three years old, Kyoto was attacked by the great forces of Kusunoki Masanori, Hosokawa Kiyouji and others as part of the continuing conflict of the Nanbokucho (Northern and Southern Courts period, 1336-92). Yoshiakira fled to Oumi Province, while Yoshimitsu’s retainers brought the boy to the priest Ranshu Ryoho of Kennin-ji for safekeeping. Ranshu dressed the child in an acolyte’s robes and, after sheltering him for five days, secretly sent him to Akamatsu Norisuke (1311-71) at his stronghold of Shirahata in Harima Province. The following year Yoshimitsu returned safely to Kyoto.
In 1367, Yoshimitsu was ordained by the head priest of Tenryû-ji, Shun’oku Myoha (1311-88). The head priest and his disciple Gido Shushin (1325-88) were to remain spiritual supports for Yoshimitsu throughout his life.

It was also in 1367 that Yoshimitsu’s father, Yoshiakira, died of illness, and the following year Yoshimitsu became shogun at the age of eleven. At his father’s wish, the governor-general (Kanrei, also “Deputy”) Hosokawa Yorisuke was appointed to assist the youthful shogun, prepare him to fulfill his role, and consolidate the power of the shogunate.
With the advice and assistance of Hosokawa Yorisuke, Yoshimitsu succeeded in bringing powerful local military governors under his control and firmly establishing his authority as shogun. In 1371 the construction of the Muromachi palace on Muromachi Kitakoji was completed and the shogunate headquarters were transferred to it. The palace included a large pond created by drawing water from the Kamo River and a luxuriously planted garden with such an abundance of flowers that it was dubbed “Hana no Gosho,” or “Palace of Flowers.”
The strife between the Northern and Southern Courts persisted, though through the efforts of Hosokawa Yorisuke the first signs of a resolution to the conflict were appearing.

As Yoshimitsu established his authority as shogun, he was encouraged by Shun’oku Myoha to diligently practice zazen. This led Yoshimitsu to decide to establish a temple as a demonstration of his dedication to Zen.
In September 1382, Yoshimitsu attended a ceremony conducted by Muso Soseki (also known as Muso Kokushi, 1275-1371) at Sanne-in in Saga. On this occasion he summoned Shun’oku Myoha and Gido Shushin and expressed his wish to build a temple that would provide lodgings for from fifty to one hundred dedicated monks. He also said that in the near future he intended to don monk’s robes himself, enter the temple, and practice with the others. The two monks readily assented to his proposal, and in October of the same year he conferred with them again, indicating that he was seeking imperial sanction for the project and wished to discuss a name for the temple. Shun’oku suggested that since Yoshimitsu’s present imperial rank was minister of the left, and the equivalent Chinese rank was shokoku, the temple should be named Shokoku-ji. Gido Shushin declared this a felicitous choice, adding that there was a Chinese temple named Dai Shokoku-ji*, and advised that since Yoshimitsu was applying for imperial sanction for the project, the full name of the temple be Joten (“sanctioned by the emperor”) Shokoku-ji. With this encouragement, Yoshimitsu decided to proceed with the temple’s construction.
The Chinese temple Xiangguosi, the Chinese pronunciation of Shokoku-ji, still exists in Haifeng, Henan Province, and is a sister temple of Shokoku-ji.

At that time Yoshimitsu was residing at the Muromachi palace, the so-called “Palace of Flowers” located at the intersection of Muromachi and Kamidachiuri Streets in Kyoto. Wishing to build the new temple in the same area, he selected the environs of Ansho-ji, which were adjacent to the palace grounds on the east, and ordered the relocation of all homes in the area. The mansions of many court nobles serving the emperor were located there, but rich and poor alike were evacuated, a show of force not unlike the Heike’s transfer of the capital from Kyoto to Fukuhara centuries earlier.
As early as October 1382, construction had begun on the Dharma Hall (Hatto) and Buddha Hall (Butsuden) under the direction of Shun’oku Myoha, who had been given full responsibility for the construction of the new temple. Yoshimitsu also personally monitored the progress. The Kano clan of Iyo Province transported the lumber, and various lords were called on to make contributions to the temple’s construction.
In December of that year Shun’oku Myoha took up residence as abbot, and in 1384 construction began on the Great Buddha Hall (Daibutsuden). At this time, the temple was officially named Mannenzan Shokoku-ji Joten Zenji. In 1386 work began on the three temple gates. At this time Shun’oku Myoha retired at the advanced age of 76 and was succeeded by Kukoku Myoo (1328-1407). Shokoku-ji was finally completed in 1392 and a dedication ceremony was conducted by imperial decree.

In 1394, just two years after construction was completed, a fire starting in the living quarters completely destroyed the entire compound. Zekkai Chushin (1336-1405), the sixth abbot of Shokoku-ji, urged Yoshimitsu, then thirty-seven years old, to rebuild, and the following year work began on the Buddha Hall and the Founder’s Hall (Kaisanto). In 1396 the Dharma Hall (Hatto) was rebuilt, and in 1399 a Great Seven-Story Pagoda was completed. At 109 meters in height, it was hailed as offering the most magnificent view in the realm, but in 1403 it was struck by lightning and burned to the ground. By 1407, Shokoku-ji had been restored to its original appearance. Yoshimitsu died the following year at the age of fifty-one.
The entire complex was destroyed by fire again in 1425, and rebuilt once again through the efforts of the abbot, Seichu Chukan (d. 1430), the fourth Ashikaga shogun Yoshimochi (1388-1426), and Yoshinori (1394-1441), who would later be the sixth Ashikaga shogun. Additional reconstruction was carried out by Ashikaga Yoshimasa (1436-90), and from 1463, with the completion of the Dharma Realm Gate (Hokkaimon), Shokoku-ji once again stood as a great Zen temple complex.
It was destroyed by fire again, however, during the Onin War, which began on January 18, 1467, and yet again in the Tembun Uprising of 1549.

After being destroyed twice by fires starting within the complex and twice by war, the restoration of Shokoku-ji began yet again in 1584, with the appointment of the ninety-second abbot Saisho Shotai (1548-1607). Along with Sen Rikyu (1522-91), Saisho Shotai served under Toyotomi Hideyoshi (1536-98), assisting with diplomatic correspondence—Hideyoshi heavily relied on him for his broad knowledge and wise counsel. After Hideyoshi’s death, he served under Tokugawa Ieyasu (1543-1616) and came to be known as “The Black-Robed Prime Minister”—black being the color of a monk’s robes. Saisho Shotai set about raising funds for the reconstruction of Shokoku-ji, and with a donation from Toyotomi Hideyori (1593-1615) the Dharma Hall (Hatto) was completed and dedicated in 1605. Having accomplished the reconstruction of Shokoku-ji, Saisho Shotai is regarded as the restorer of the temple’s fortunes.
The Dharma Hall (Hatto) that was built at this time is the oldest surviving example of its kind in Japan and is regarded as the epitome of the Zen architecture that emerged in the Muromachi period. Surrounded by a grove of pine trees, the majestic building has been designated an important cultural property. Shokoku-ji suffered substantial destruction in the Great Temmei Fire of 1788, but fortunately the Dharma Hall (Hatto) escaped damage.

Rebuilding continued under the 113rd abbot Baiso Kenjo (1719-1801) and the 115th abbot Imyo Shukei (d. 1808), and in 1807 Kyoreimon’in (1743-1795, consort of Emperor Gomomozono) donated her former palace to the temple. The palace was rebuilt as the Founder’s Hall (Kaisanto), and the Abbot’s Quarters (Hojo), the Kitchen and Living Quarters (Kuri), and several other buildings that survive to this day.

After the Meiji Restoration in 1868, the government adopted a policy of the suppression of Buddhism and all Japanese temples found themselves in dire straits. The 126th abbot of Shokoku-ji, Dokuon Joju (1819-1895) pressed the new government’s Department of Religion to recognize freedom of religion. Winning the trust of the Japanese Buddhist community through his opposition to the Meiji government’s anti-Buddhist policies, he was appointed to the highest rank (Daikyosho) in the Meiji government’s department of religious propagation, the Daikyoin. Dokuon Joju not only won freedom of worship for Japanese Buddhists but also restored the finances of Shokoku-ji, which had been seriously threatened by the anti-Buddhist persecution.